Noble Helium Limited (ASX:NHE) (“Noble Helium”, “NHE” or “the Company”) is pleased to announce that the Company has now executed the agreement, as outlined in its IPO Prospectus, that provides Noble Helium with exclusive access to the world’s first and only Global Atlas of Helium Occurrences and Exploration Play Fairway Analysis (“Atlas”), constructed by two of the world’s leading helium geoscientists, Professor Jon Gluyas of Durham University, UK and Professor Chris Ballentine of Oxford University, UK.

The Atlas is a unique and difficult to reproduce resource that provides NHE with significant competitive advantage to allow it to find and secure additional high potential helium opportunities. Significantly, the licencing agreement provides for ongoing technical support from Professors Gluyas and Ballentine, with their biographies summarised in Appendix 1.

“Having recently completed our IPO and listing on the ASX, I am pleased that we have been able to quickly begin executing the value-adding activities outlined in our Prospectus.

“Successfully closing our agreement with the world’s leading helium geoscientists for exclusive access to their global helium database underpins and accelerates Noble Helium’s plans to build a globally significant helium portfolio. This is a key step in securing supply for this highvalue, in-demand, critical industrial gas with its fragile and increasingly challenged global supply chain.

“We look forward to leveraging the Atlas and our long-standing relationship with Jon and Chris to identify two further core areas later in 2022 and announcing additions to our helium portfolio in due course.” 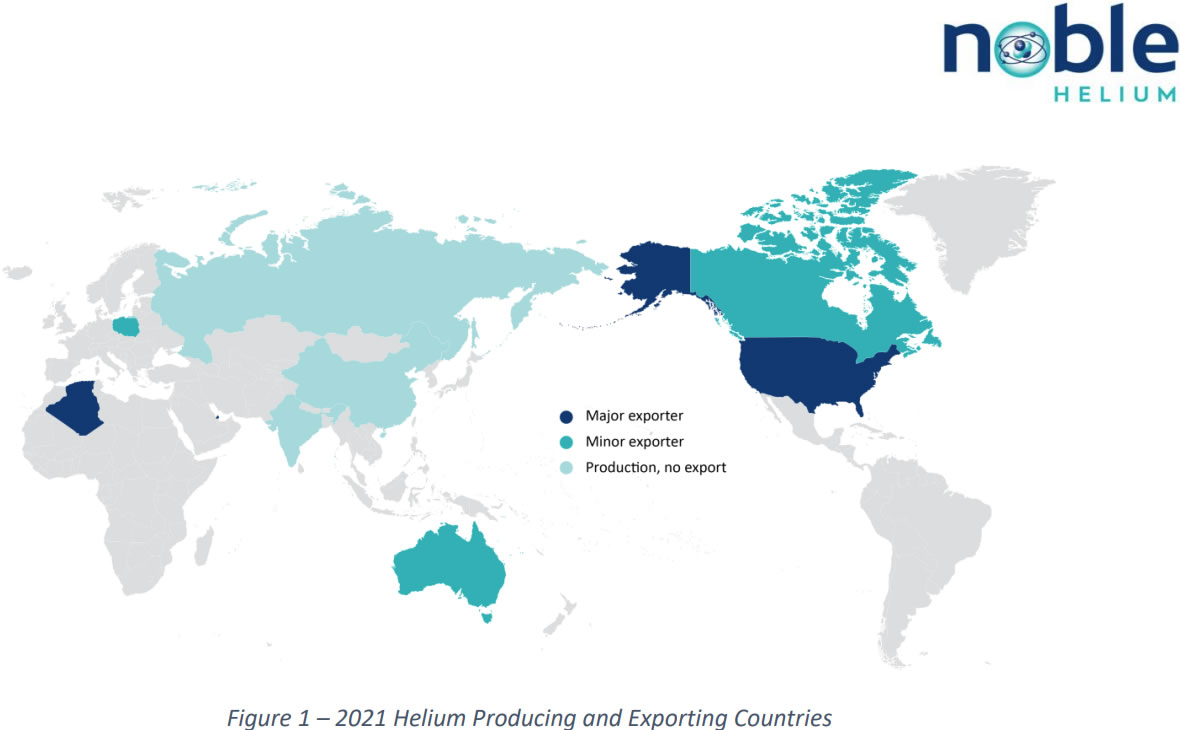 Leveraging the exclusive Atlas, the Company will target similar high-impact helium opportunities in other jurisdictions for resources capable of adding significantly to the diversity of the global helium supply chain.

This announcement has been authorised for release on ASX by the Company’s Board of Directors.

This announcement has been authorised for release on ASX by the Company’s Board of Directors.

Appendix 1: About Professors Gluyas and Ballentine

Dr. Chris Ballentine is the Chair of geochemistry and head of department of the Department of Earth Sciences at the University of Oxford in the United Kingdom. He uses properties of the noble gases to understand the origin and evolution of Earth’s atmosphere and mantle.

Dr Ballentine has held the vice president, president, and past president positions with the European Association of Geochemistry. He is a member of the Board of Governors of the Oxford Museum of Natural History and the American Geophysical Union, as well as a former scientific steering committee member for the Deep Carbon Observatory. In 2008, he won the Geological Society of London Bigsby medal for significant contributions to geology. The AGU chose Ballentine as a Fellow in 2013, and in 2016, he won the Eni Award, given to researchers who make advanced scientific breakthroughs in the field of energy, for “New Frontiers of Hydrocarbons”.

Dr Jon Gluyas is Executive Director of the Durham Energy Institute at Durham University in the UK. He is also the Ørsted/Ikon Chair in Geoenergy, Carbon Capture & Storage in the Department of Earth Sciences at Durham.

Dr Gluyas earned his Ph.D. at the University of Liverpool in 1981. He spent the early part of his career working in the oil and gas industry for BP Exploration, Acorn Oil & Gas and Fairfield Energy before moving into academic roles in 2010. In 2000, Dr Gluyas was awarded the Aberconway Medal by the Geological Society of London.

Dr Gluyas and Dr Ballentine worked together on a research project sponsored by Statoil in 2005 that confirmed major helium potential in Tanzania’s East African Rift Valley. Until this point, helium had only ever been found by accident when looking for petroleum gas. This research programme was designed to understand the source, maturation, migration and accumulation of helium in the Earth’s crust.