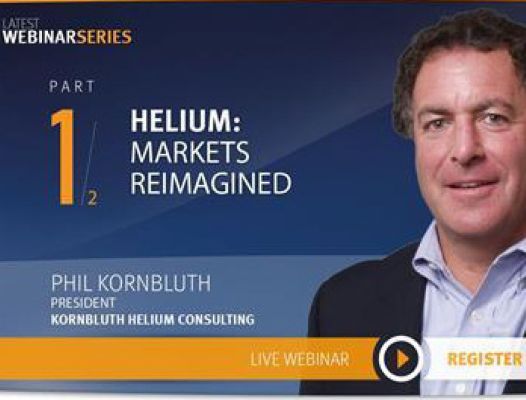 Phil Kornbluth joined the team for a conversation around all things helium.

A less unpredictable future for helium?

In gasworld’s latest webinar, Helium: Markets Reimagined, Part 1, helium expert and President of Kornbluth Helium Consulting, Phil Kornbluth, joined the team for a conversation around all thing’s helium including the potential for increased market volatility during the current Russia/Ukraine conflict.

With recurring shortages of helium over the past 16 years, 2022 was set to be a year of transition to more plentiful supply with operations having begun at Gazprom’s Amur facility in Eastern Siberia. A fire at the facility in September 2021, followed by an explosion and subsequent fire on 1st January of this year created uncertainty over short-term helium supply.

Prior to ‘Helium Shortage 4.0’ long-term expectations of Russia’s helium market were set to hit new highs, with its production anticipated to jump from just 3% in 2021 to 26% by 2025.

Additional challenges are set to be faced in the helium sector with the current Russia-Ukraine war creating unforeseen consequences for supply and distribution of the gas.

The Amur plant was originally anticipated to reopen this year following the fire but given the tumultuous nature of the region’s politics, Kornbluth sees it as increasingly unlikely.

“There is some aspiration to try to get the plant restarted before the end of the year, but that may or may not happen,” he said. Adding, “It’s clear that this year is going to be another year of tight supply conditions, shortages, supply allocations and elevated prices.”

Although not expecting to see much of a return to normal this year, prices are anticipated to stabilise slightly when the US’ Bureau of Land Management (BLM) – which is currently ‘prudently’ allocating resources – resumes normal operations.

How could the Russia-Ukraine crisis and sanctions affect global helium supply?

The inherent unpredictability of helium has been exacerbated by the ongoing crisis in Ukraine. From a short-term standpoint, Kornbluth believes that the conflict will not have a ‘big impact’ on supply within the next 12 months.

“Nobody’s expecting much out of Russia anyway but, longer term, it becomes very difficult to do business with Russia and from that point it could have a big impact.”

Longer-term could prove more challenging, however, as it’ll likely take far longer to get Amur repaired and restarted.

Kornbluth explained, “Longer term impact, well, it’s going to delay the progress in getting Amur repaired and restarted. And it’s also will impact the Irkutsk oil company’s projects for the same reason. So why is it? It’s going to be much more difficult for foreign travel experts to travel to Russia.”

With Visa’s typically difficult to obtain at the best of times, Kornbluth believes that current developments could make it even more challenging to travel to Russia following cessation of the conflict and the reopening of borders.

He added that the conflict brings home the importance of factoring in political risk and ensuring a supply portfolio that is not overly exposed to geopolitical events.

“This is just pointing out a risk group. Depending on how things work out politically it may be difficult for Western companies to travel or to do business with Russia for a while.”

This disruption is likely to stay for a while as events over the past few days have seen Russia’s main bank, Sberbank, plummet 94% on the stock market following its departure from the EU. Additional sanctions saw Gazprom and other Russian energy conglomerates removed from the London Stock Exchange.

Speaking in 2020 at the onset of the Covid-19 pandemic, Kornbluth told gasworld about the initial impacts of the virus on the global helium market. Initially, demand from China – the world’s second-largest helium market – was reduced significantly when the Chinese economy was put on lockdown.

In the US the implementation of mandatory ‘social distancing’ saw the demand for party balloons – which represents as much as 15% of the US helium market and up to 10% of global demand – plummet.

The pandemic had a profound effect on the helium supply chain, with lockdown of the Chinese economy causing bottlenecks at ports, in turn affecting the ability for major helium suppliers to get empty containers out of China and back to sources in Qatar and the US for refilling.

Fast-forward to 2022 and the impact of Covid upon helium supply seems to have abated.

“Varying levels of demand loss due to Covid has pretty much returned to the market,” explained Kornbluth.

“I think there’s probably been a bit of demand destruction from the last shortage, but I think the impact of Covid on demand has largely gone away.”

Promises were made by industry that the future of helium was to be less unpredictable, Kornbluth was asked if this – given recent events – is still the case.

“I hope so, but we have a way to go before we get to that point. There’s going to be another big plant in Qatar and I hope the helium supply later in the decade is going to be much more reliable.”

Re-published with the kind permission of gasworld – www.gasworld.com

FOOTNOTE: In addition to fossil fuels, Russia was heading toward dominance in the supply of helium, so vital to most 21st century technology production, some of which is the manufacture of Semi-Conductors. Fibre Optic Cables, Space Exploration, the operation of Magnetic Resonance Imaging (MRI) machinery and a whole lot more.